This is a simple concept which has been around for a long time.  The audio source could be a microphone, musical instruments or recorded sounds.  These may be going into an audio mixing system and then perhaps to the show relay, but will also be fed to the loop driver which has input processing, amplifies the signal and converts it into an audio current that goes into a loop around the edge of the auditorium.  This current generates a magnetic field of audio frequency in the room which, if correctly designed, will cover every seat. 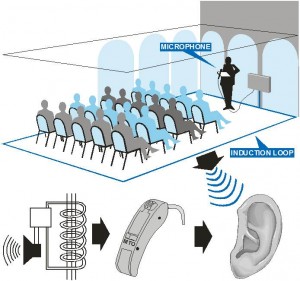 A hearing-aid has a coil inside it that picks up this magnetic field, amplifies it and feeds it out of a speaker in the hearing-aid and into the ear.

Now go to: Standards and requirements